With the help of the ZooBorns community, Potter Park Zoo received over $700 in donations from the Binturong Kit naming contest.

“We can't thank you enough! This money goes towards Potter Park Zoo's mission to inspire conservation of animals and the natural world. Thank you again!” said the Zoo’s Communications Specialist Heath Thurman.

Continue reading "The Bintlets Have Names!" »

You Can Help Name These Bintlets!

Michigan’s Potter Park Zoo is offering $5 chances to name their baby bintlets! Visit the contest link in the video description and cast your vote before Friday at 10pm EST.

There are four name pairs to vote from!

Continue reading "You Can Help Name These Bintlets!" »

Michigan’s Potter Park Zoo’s bintlets turned one month old last week! The animal care team continues to actively monitor each bintlet to ensure they're growing at a healthy rate. Both bintlets weigh just under 1 kilogram, or 2.2 pounds. That’s equivalent to a liter of water or a pair of shoes! While raising twins is quite the challenge, mom Thistle continues to do an excellent job. ⁠

Potter Park Zoo celebrated Independence Day with the birth of baby bintlets. Female binturong (Arctictis binturong) Thistle gave birth to three babies the evening of July 4. This is the first binturong birth at the zoo in over two decades. Two of three babies are thriving. However, the third bintlet was found to be sick and despite 24-hour care by veterinary and animal care staff, the bintlet passed away in the week following its birth. 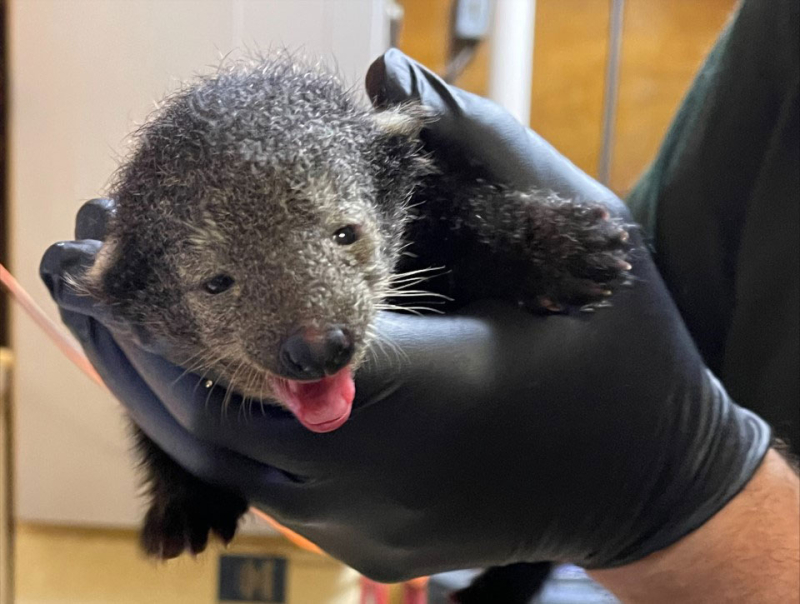 Born the 1st of October, a Palawan Binturong kit, now just over 2 weeks old, is visible in the window of Nashville Zoo’s Veterinary Center.

The reason the kit is being bottle-fed is that it’s mom couldn’t produce enough milk.

Binturongs are large nocturnal mammals native to the forests of Southeast Asia.

Binturongs are sometimes called bearcats, even though they are not related to bears or cats. 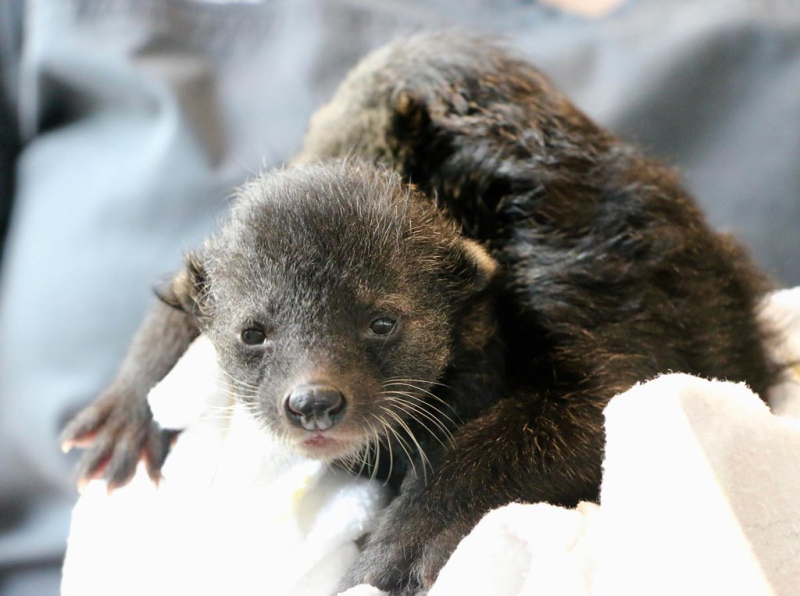 Nashville Zoo is pleased to announce that one of their behind-the-scenes Palawan Binturongs gave birth to two kits. New mom, Lucy, welcomed one male and one female on May 13.

“The kits are doing fantastic,” said Dr. Heather Robertson, Nashville Zoo Director of Veterinary Services. “However, Lucy was not able to produce milk for her babies, so we will be hand-raising the kits in one of our Veterinary Center Neonatal Care rooms, which includes a public viewing window."

The kits weighed between 299-312 grams each. With the addition of these cubs, the Zoo is now home to eight Binturongs. Nashville Zoo has welcomed a total of 10 kits since 2015. There are currently 14 Binturongs in the Association of Zoos and Aquariums’ (AZA) care and 11 in facilities globally. 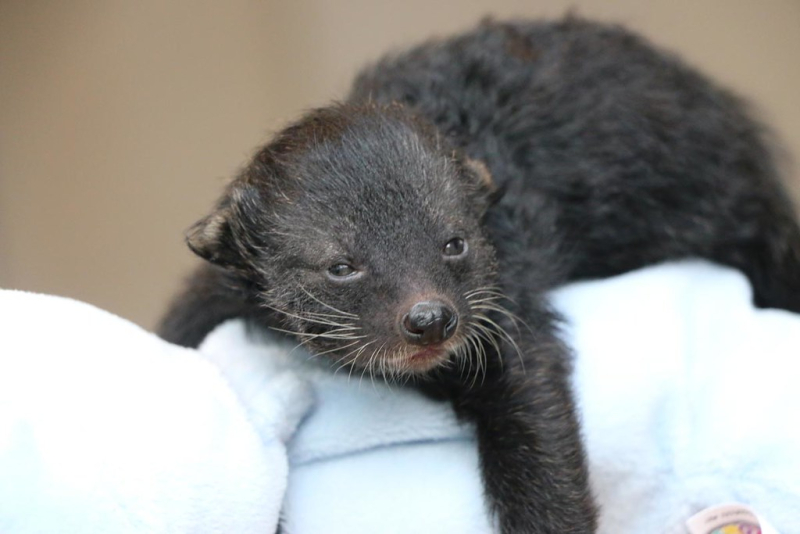 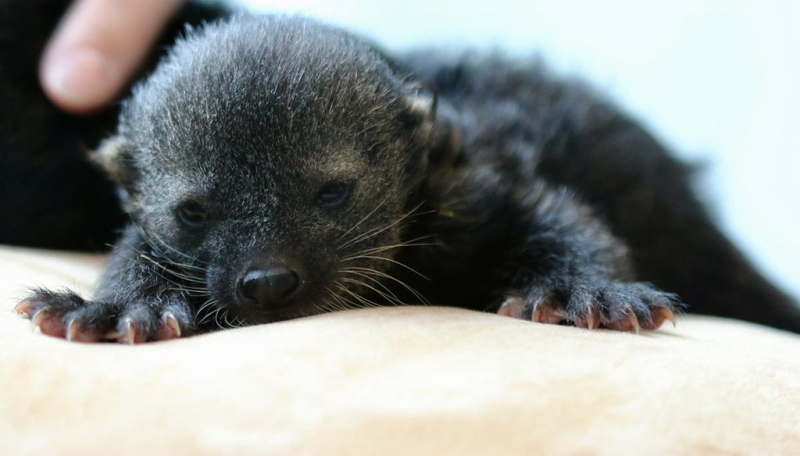 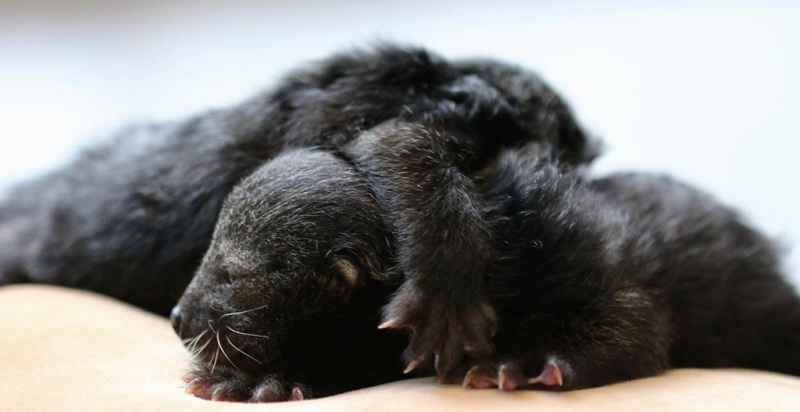 Four-year-old Lucy and the four-year-old father, Gru, are currently behind the scenes. For now, the new kits will stay at Nashville Zoo, with plans to eventually include them in ambassador animal programs at other zoos.

While five adult Binturongs at Nashville are currently not on exhibit, one of them, Wilbur, was hand raised by the Nashville Zoo Behavioral Husbandry team and can be seen along the Zoo's trails as part of the Zoo’s Ambassador Animal Program.

The Palawan Binturong (Arctictis binturong whitei) is a smaller subspecies of Binturong (also known as bearcat) only reaching around 40 pounds. While they aren’t considered endangered, the mammal is officially classified by the IUCN as “Vulnerable” due to destruction of habitat and the illegal pet trade.

Nashville Zoo contributes to the protection of this species by being a part of the Palawan Binturong Species Survival Plan® and providing species information to the Binturong Studbook. Perth Zoo is celebrating the birth of the first Binturong cubs in the Zoo’s 119-year history.

Two cubs, a male and a female, were born September 6 to mother, Selasa, and father, Rabu. The parents arrived at the Zoo from Singapore Zoological Gardens, in 2016, to establish a Perth Zoo Binturong family.

“Binturongs are capable of delaying their pregnancy after mating until they feel the environmental conditions are favourable. So, it’s great to see that Selasa is feeling secure and content here in WA!”

“She is a first time Mum, but has been lovingly tending to her offspring in the nest box and also allowing us to photograph the cubs’ progression. She’s even trusted us to handle her cubs to quickly weigh them.”

“They tip the scales just over one kilogram, a good weight for Binturong infants,” said Marty. The new arrivals recently opened their eyes, and they are beginning to take in the world around them. Zoo Keepers expect they will start exploring their exhibit in coming weeks and become more visible to the public.

Marty continued, “Visitors who are unsure of where to catch a glimpse of the Binturong family may smell them first. They are famous for their strong odor, which is often likened to popcorn!”

The Binturong (Arctictis binturong), also known as a Bearcat, is a viverrid that is native to South and Southeast Asia.

The estrous period of the Binturong is 81 days, with a gestation of 91 days. The average age of sexual maturation is 30.4 months for females and 27.7 months for males. The Binturong is one of approximately 100 species of mammal believed by many experts to be capable of embryonic diapause, or delayed implantation, which allows the female of the species to time parturition to coincide with favorable environmental conditions. Typical litters consist of two offspring, but up to six may occur.

It is uncommon in much of its range, and has been assessed and classified as “Vulnerable” on the IUCN Red List due to a declining population trend that is estimated at more than 30% over the last three decades. The main threat to the species is severe destruction of habitats in their native parts of the world.

Those wanting to help save Binturong from extinction are encouraged to “adopt” one of Perth Zoo’s cubs. Zoo adoption packages ensure more funds are poured into giving wildlife a chance of survival. More information can be found at: www.perthzoo.com.au The four fluffy siblings have been tucked away with their mother since their birth, but on September 28 they received their first veterinarian exam and vaccinations. Visitors to the park can now see the curious quad exploring their outdoor exhibit.

"The special thing about this litter is that almost all the young animals look the same", explained park curator, Christian Kern. "Only one has a slightly lighter head. Usually, [Binturongs] siblings are quite different in the facial and skin coloring." The Binturong (Arctictis binturong), also known as a Bearcat, is a viverrid that is native to South and Southeast Asia.

The estrous period of the Binturong is 81 days, with a gestation of 91 days. The average age of sexual maturation is 30.4 months for females and 27.7 months for males. The binturong is one of approximately 100 species of mammal believed by many experts to be capable of embryonic diapause, or delayed implantation, which allows the female of the species to time parturition to coincide with favorable environmental conditions. Typical litters consist of two offspring, but up to six may occur.

It is uncommon in much of its range, and has been assessed and classified as “Vulnerable” on the IUCN Red List due to a declining population trend that is estimated at more than 30% over the last three decades. The main threat to the species is severe destruction of habitats in their native parts of the world.

The EAZA has established a conservation breeding program for Binturongs, including Tierpark Berlin’s animals. Tierpark Berlin supports the organization ABConservation, which specializes in the protection of the Binturongs, at its Bearcat Study Program on Palawan Island in the Philippines.

"Binturongs are kept in a comparatively large number of European zoos, but their breeding does not work regularly. The pairs must harmonize well in order to reproduce. It is therefore all the more pleasing that our Berlin couple have regularly been up-and-coming since 2003," said Zoo and Tierpark Director Dr. Andreas Knieriem.

Currently, the Binturong at Tierpark Berlin are the only ones in Germany. The four siblings are also currently yet-to-be-named. What smells like popcorn, purrs like a kitten, and has a tail as long as its body?  Why, a Binturong of course! Meet the The Staten Island Zoo's newest resident a six-week playful and inquisitive Binturong named “Oliver Wolf.” The four-pound creature, also known as Bearcat, is a viverrid found in South and Southeast Asia. It is uncommon or rare over much of its range and listed as vulnerable because of a population decline estimated to be more than 30%.

Weighing 50 lbs or more at maturity, Oliver Wolf will eventually serve as an ambassador animal, meeting and educating the public about the plight of his species in the wild. Binturongs are identifiable by a prehensile tail that is as long as its body and are classified as carnivores although they eat mostly fruit. They are related to civets and fossas. In the wild, Binturongs sleep during the day high in the forest canopy and love to bask in the sun. They play a special role in rainforest ecology by spreading seeds from the fruits they eat and subsequently poop out. From 2005 to 2009, the Staten Island Zoo exhibited the only Binturong in the New York metropolitan region and was among only 27 zoos in the country to have them in their collection. They are considered a “red” program in the Species Survival Plan (SSP) due to the low numbers available for breeding and thus low genetic diversity. The Staten Island Zoo participates in the international Species Survival Program the strategy of which is to add to the breeding population of threatened and endangered species. Despite having a body like a small bear and a face similar to a cat, the secretive Bearcat is actually a member of the civet family, more closely related to Mongooses and Meerkats (and true civets of course). These baby Bearcats, also known as Binturongs, were born at the Wildlife Reserves Singapore's Night Safari on January 26.

Found primarily in the rainforest treetops of South and Southeast Asia, Bearcats have a mixed diet of fruits, leaves, birds, fish and eggs. Extremely rare among carnivores, this speices has a fully prehensile tail. The meaning of their other name, Binturong, is unknown as the native language it was derived from is now extinct.