This adorable little boy joined the Saint Louis Zoo on Monday, March 21, 2022. The baby Guereza colobus monkey, named Ficus, can be seen with his family group at the Primate House or Primate Canopy Trails. 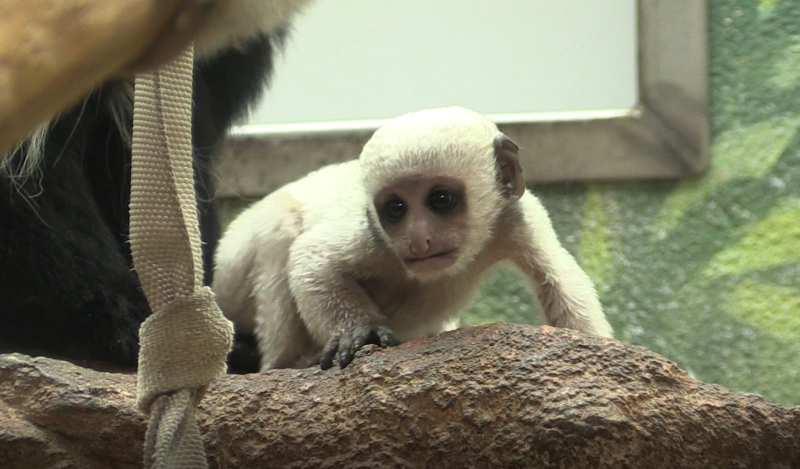 Ficus is the first monkey born at the Zoo since the opening of Michael and Quirsis Riney Primate Canopy Trails, a 35,000-square-foot outdoor expansion connected to the Primate House. The Zoo is excited to be able to offer baby and mom, along with the rest of the colobus family, access to this outdoor space, providing the baby with valuable time in nature, sunlight, and fresh air. For the first time, guests can welcome a new baby in this outdoor habitat.

This precious colobus monkey was born at Dallas Zoo on January 26 to mom, Pili and dad, Kuruka. He or she is doing well and nursing often.

Hungary’s Pecs Zoo has experienced a bit of a baby boom! Mandula here (meaning Almond) is the zoo’s second alpaca. Born September 24, he’s a very happy, funny and active little guy, who loves to play with the adults and to annoy his half brother Duett.

This Colobus baby was a surprise for Pecs Zoo officials. Born Jan. 1, he or she arrived just ten months after the zoo's previous offspring.

Last but not least is baby Vitéz, the Grivet infant, born November 2nd. He's the 5th offspring to mom Berta and dad Radar.

Drusillas Zoo Park near Alfriston are thrilled to announce the safe and healthy arrival of a new baby colobus monkey, and they are asking for help to name the gorgeous youngster! 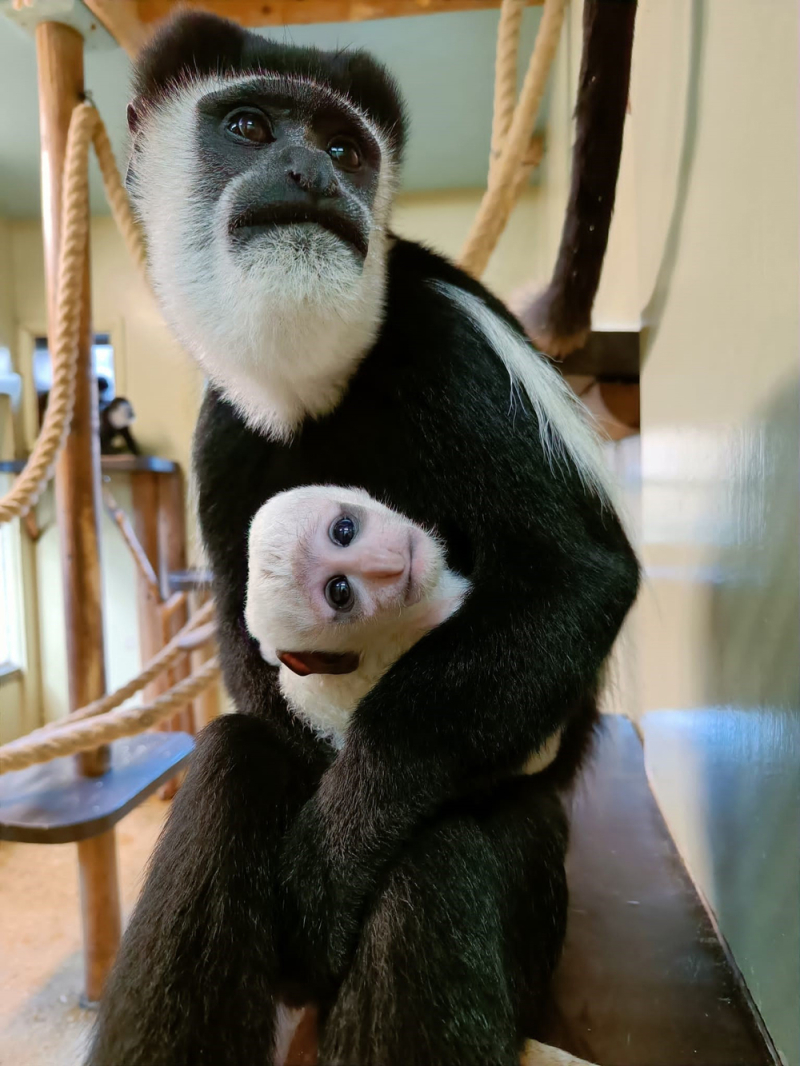 The precious youngster was born on 13th October, to mum Adaeze and dad Maarten, and Keepers at the Zoo are delighted with how the adorable babe is thriving so far.

It's a triple header and ZooBorns invites you to "Squee"-For-Three. This video features the baby Tiger trio at  @Palm Beach Zoo & Conservation Society , A Colubus Monkey infant at  @Gladys Porter Zoo , and The The Living Desert's recently emerged Yellow-footed Rock Wallaby. 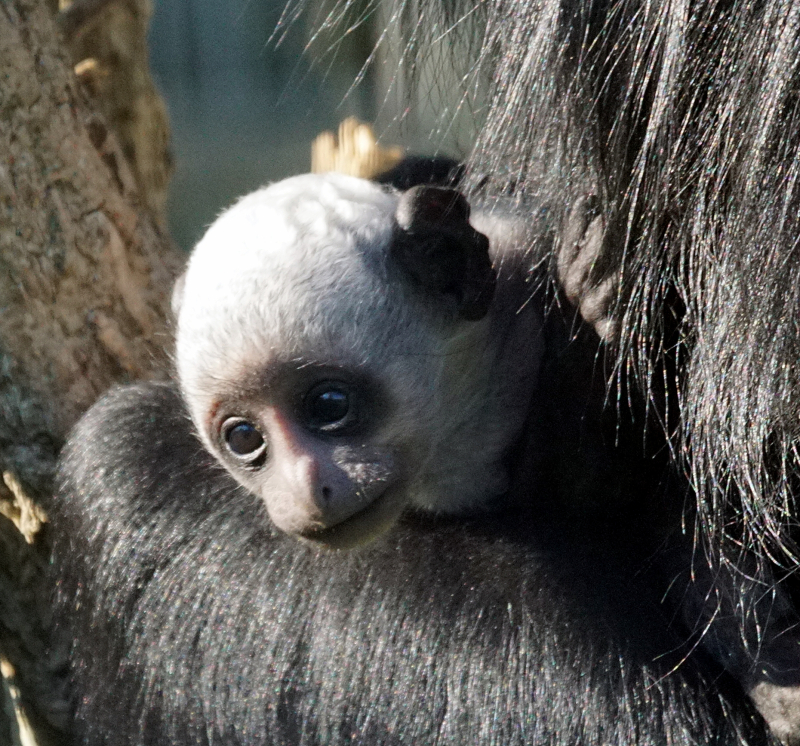 On October 1st, staff at Africa Alive!, in Kessingland, Suffolk, UK, were overjoyed to find a very welcome addition to the park’s growing family of King Colobus Monkeys.

At birth, Colobus Monkeys are covered in white fur that is gradually replaced with black hair matching the adults. The young are not very agile to begin with and are carried around for some time with the female primarily responsible for its care. For this reason, it is difficult to sex the baby at the moment and therefore, it is still to be named.

The parents, Ebony and Bert, arrived from Marwell Zoo in Hampshire and Paignton Zoo in Devon in 2007 and have produced several babies since, with Ebony proving to be an exceptional mother once again. 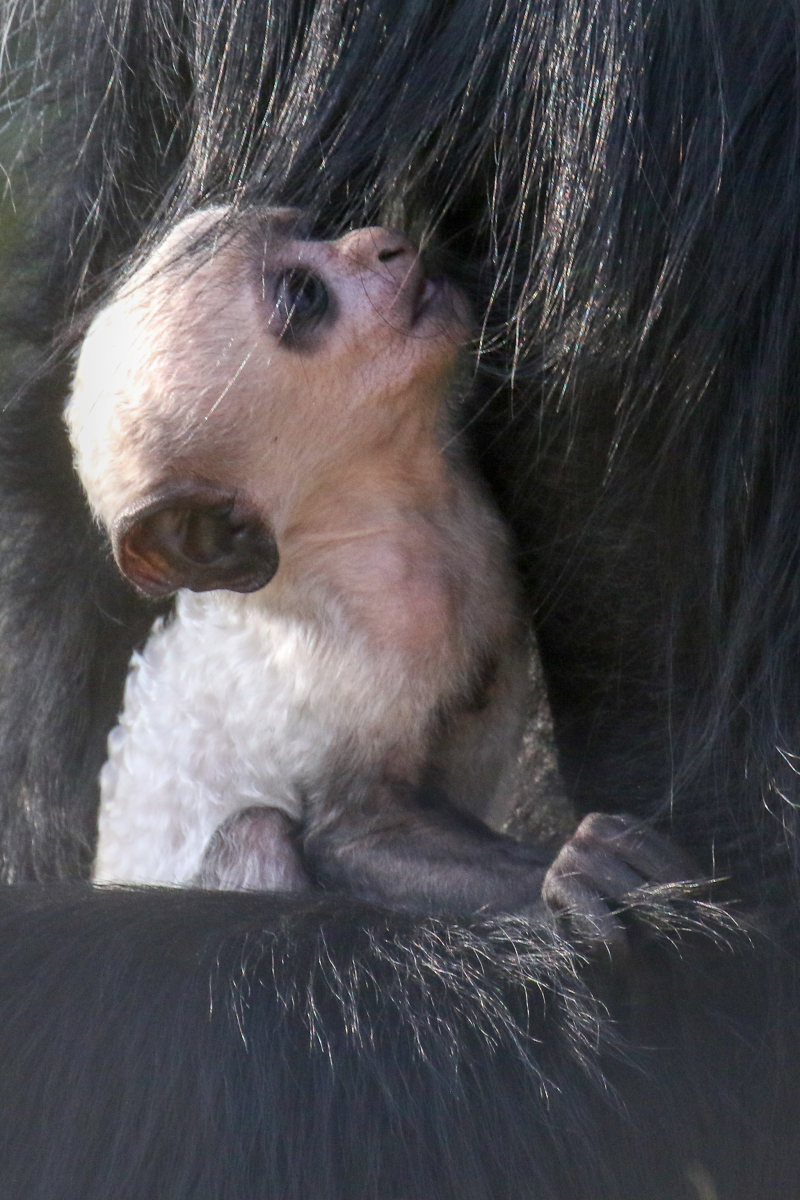 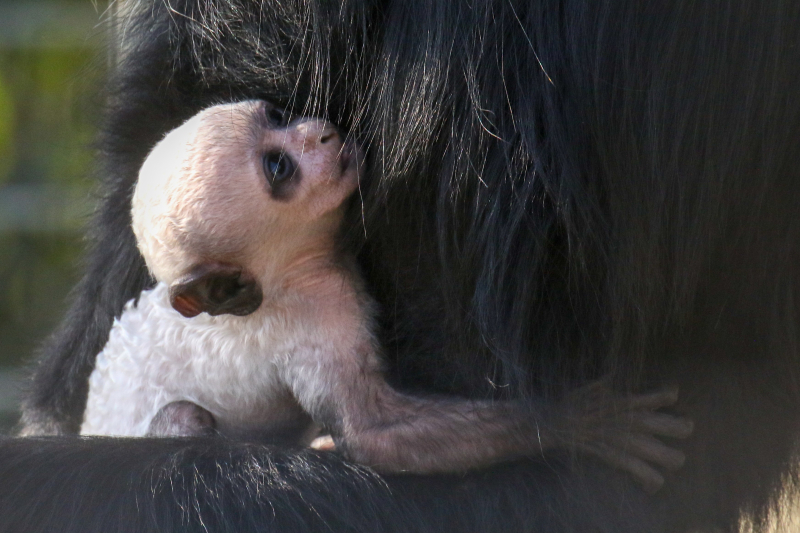 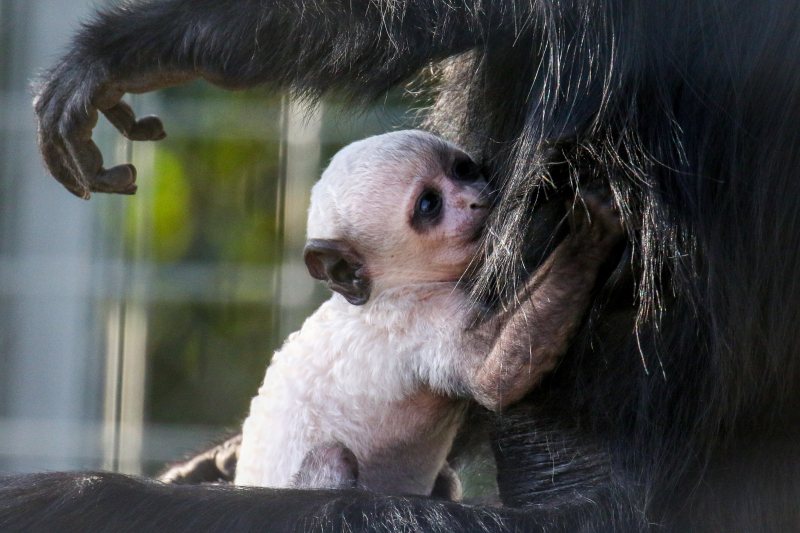 The King Colobus (Colobus polykomos), also known as the Western Black-and-white Colobus, is a species of Old World monkey, found in lowland and mountain rain forests in a region stretching from Senegal, through Guinea-Bissau, Guinea, Sierra Leone and Liberia to the Ivory Coast. The species is currently classified as “Vulnerable” by the IUCN. Their main threats are habitat destruction and hunting by man.

Black-and-white Colobus are herbivores. Their diet is mainly made up of leaves although they will occasionally eat fruit. As leaves do not contain many nutrients, Colobus have special multi-chambered stomachs, similar to those of cows, to extract as much nutrition from their food as possible.

There are very few zoos within Europe that keep this species and none outside of Europe, so this is yet another important addition to the park and will play a crucial role in assisting with the European breeding programme for this species. 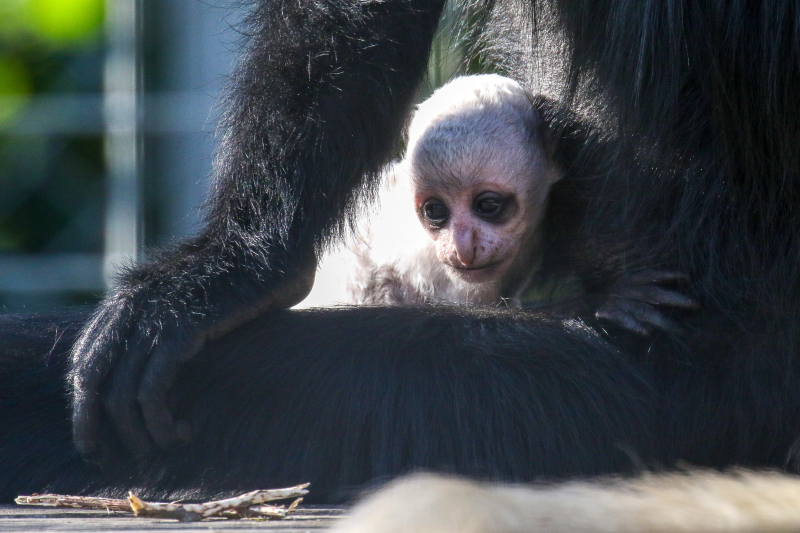 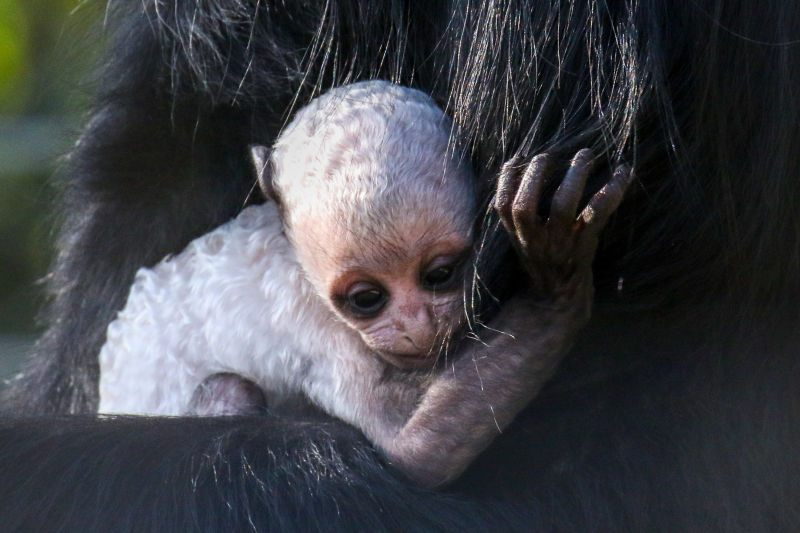 A male Black-and-white Colobus Monkey was born at the Saint Louis Zoo on December 29. Zookeepers will name the baby at a later date, but visitors can see the new family at the Primate House during regular Zoo hours. Colobus infants are born with all white hair and a pink face. In contrast, adults are primarily black, with white hair encircling their faces and half of their tails. Adults have a distinctive mantle of long white hair extending from their shoulders around the edge of their backs. An infant’s hair coat will change gradually until they reach adult coloration at about 6 months.

Colobus live in multi-female families and take turns caring for each other’s newborns, which is known as ‘allomothering’. Eighteen-year-old, Cecelia, is the dominant female and an experienced mother who is taking great care of the newborn, as well as her one-year-old daughter, Willow. Also in the family, or troop, are brothers Ziggy (age 2) and Simon (3), and their half-sister, Binti (4). Eleven-year-old father Kima can be seen watching stoically over his family and interacting with the youngsters.

The baby will stay with mom for nursing and sleeping. But at other times throughout the day, it’s will be common to see older sister, Binti, take the baby while mom eats or interacts with other members of the family, according to zookeepers. This is a skill necessary for female youngsters to learn so they become successful mothers in the future.

“The new baby is doing really well and becoming very interested in everything happening around him,” says Brooke Johnson, Saint Louis Zoo primate keeper and Association of Zoos and Aquariums (AZA) institutional representative for the Black-and-white Colobus Monkey. “Brother and sister, Binti and Simon, are doing a great job taking care of and looking after their new sibling; and one-year old Willow is adjusting very well to sharing her mom with her baby brother."

Black-and-white Colobuses (or colobi) are monkeys of the genus Colobus and are native to Africa. They are closely related to the Brown Colobus Monkeys of genus Piliocolobus.

The new birth at the Saint Louis Zoo is part of the AZA Colobus Species Survival Plan (SSP), a program to manage a genetically healthy population of Black-and-white Colobus Monkeys in North American zoos. After a six-month gestation period, she was born to mum Sophia on February 2. Mandible was given her unique moniker by zookeepers to fit with the tradition of naming the Colobus family after bones in the body, which includes Mandible’s siblings Anvil and Maxilla.

Bernie Corbett, zookeeper at ZSL London Zoo, said: “Colobus Monkeys are born pure white, and they stay this way until they are around five-months-old when they begin to develop their adult colouring: a glossy black coat with a fringe of long white hairs and a large white tuft at the end of the tail.”

“The new-born Colobus Monkey will cling onto her mum as she swings from tree to tree, leaping metres into the air. Mandible is starting to test out her jumping skills and mimicking mum as she learns new actions and movements.”

“Contrary to what many people believe, not all monkeys eat bananas. This species (Colobus guereza) are leaf eaters; they enjoy a range of leaves, flowers and twigs. A particular favourite of the ZSL London Zoo family are the twigs from an apple tree.” The Eastern Black-and-white Colobus is native to much of west central and east Africa, including Cameroon, Equatorial Guinea, Nigeria, Ethiopia, Kenya, Tanzania, Uganda and Chad.

The species is currently classified as “Least Concern” on the IUCN Red List. Although the population is somewhat stable, threats exist in the wild. According to the IUCN: “This species is threatened in parts of its range by habitat loss through deforestation for timber, conversion to exotic forest plantations and conversion to agricultural land (e.g., von Hippel et al. 2000). Hunting may also be severely impacting populations in the western part of the species range; Mwenja (2007) commented, in passing, that this subspecies is killed for its skins by local pastoralists in and around the Matthews Range Forest Reserve.”

The family of Colobus Monkeys, at ZSL London Zoo, is the largest troop in Europe and second largest in the world (according to international zoo database, ZIMS).

The zoo’s troop of 17 will be moving house, in the summer of 2018, to a newly renovated enclosure. Their new home, the iconic Snowdon Aviary, will be transformed into a walk-through exhibit for the stunning primates.

For more information or to visit Mandible and the other 18,000 incredible residents at ZSL London Zoo (and save 10% on ticket prices*), simply book online now at: www.zsl.org

*Children under three-years-old can visit for free. The Cincinnati Zoo & Botanical Garden’s first baby of 2017 is a Guereza Colobus. The little snow-white baby was born two weeks ago to first time mom, Adanna, and dad, Tiberius. Keepers report the infant is strong, alert and nursing. Once the sex is determined, a name will be given.

The species is a type of monkey once thought to be abnormal because it has no thumb, only a stub where the digit would usually be.

“Tiberius was born here and lived most of his 21 years in a bachelor group that included his father and brothers. Caring for this all-male group was best for the North American Colobus population, but also meant taking a multi-year break from breeding,” said Ron Evans, Cincinnati Zoo’s curator of primates. “With the Cincinnati line out of the breeding population for all those years, Tiberius became one of the most eligible bachelors in the population after he outlived his siblings,”

Four-year-old Adanna arrived at Cincinnati Zoo in 2015, along with another young female, on a breeding recommendation from the Species Survival Plan (SSP), a body that manages populations in Zoos accredited by the Association of Zoos and Aquariums (AZA).

“Their [the two females] playful nature rubbed off and we saw lots of lighthearted play behavior between the three of them,” said Evans. “Tiberius is in his senior years, so it’s significant that his genes are now represented in the North American Zoo population.” It was a “White Christmas” at Lincoln Park Zoo in Chicago. A Black-and-white Colobus Monkey was born December 25, and the snowy-white infant is now on exhibit at the zoo’s Helen Brach Primate House.

The Colobus baby not only joins its 12-year-old mother Kutaka (koo-tah-kah) and 23-year-old father Keanjaha (key-an-ja-ha), it also shares home with 15-month-old female infant Nairobi and two other adult females.

The sex and measurements of the newborn are yet to be determined, as the baby is clinging tight to mom and a health check isn’t possible just yet.

The zoo’s Colobus infant is a part of the Black-and-White Colobus Species Survival Plan ® (SSP), which cooperatively manages the Association of Zoos and Aquariums (AZA) accredited-zoo population.

The baby is the second successful offspring for this breeding pair. Lincoln Park Zoo’s Davee Center for Epidemiology and Endocrinology carefully monitored the progesterone levels in Kutaka’s urine samples to estimate a due date window and ensure that the mother and baby were healthy for the entire duration of the expected pregnancy.

“Kutaka is an extremely attentive mother,” said Curator of Primates Maureen Leahy. “We’re excited for the newest member of the multi-generational Colobus troop to interact with the entire family from juvenile to geriatric members. In fact, we’ve already observed the infant’s aunt and older sister briefly carrying the new infant, a species-typical behavior called alloparenting or ‘aunting behavior.’” One of five species of Colobus Monkeys, the Black-and-white Colobus is an arboreal species native to equatorial Africa.

At birth, Colobus Monkeys have white hair and pink skin in stark contrast to the black-and-white adults. Around 3-weeks-old, the face and ears start to darken until the infant is almost completely black-and-white at around 3 to 4 months old.

The Colobus infant and parents, Kutaka and Keanjaha, can all be seen on exhibit daily from 10 a.m. – 3 p.m., at Lincoln Park Zoo’s Helen Brach Primate House.