MAISIE UPDATE: Here, there, and everywhere, 1-year-old chimp Maisie is on the go. She has now climbed almost all the way to the top of the indoor habitat, and has been showing off more of her personality—just look at that little display towards female Asali! Most of her time is still spent with male Louie (seen in this video snuggling Maisie) and fellow infants Lola and Violet.

Maisie's mother would not care for her and she was brought to The Maryland Zoo in September of 2020 to be hand-reared before being integrated into the Maryland Zoo chimpanzee troop. Maisie turned 1 on August 28, 2021.

Out of all of the troop members, baby chimp Maisie has recently become the most comfortable around male chimps Louie and Alex. The three of them have had epic play sessions and we are noticing lots of happy vocalizations and facial expressions. Maisie has even been seen belly riding on Louie in the outdoor yard.

Overall, female Bunny still takes interest, but Maisie prefers to be with the males right now, especially at night. She has been sleeping both in their nests and on them. When Louie is around, Maisie shows more confidence with other members of the troop, and the chimp care team has noticed growth in overall attitude and playfulness from Louie and Alex as well.

Maisie Is 1! A Look Back and a Peek at Her August 28th Party!

Last October, she came to Maryland Zoo as a tiny baby at 2 months old. From her care team hand-raising her day and night to her successful introduction into the troop, Maryland Zoo couldn’t be more proud of how far baby chimp Maisie has come—and now she’s one year old! 😍

Last Wednesday, August 4, Maisie, the 11-month-old chimp, went for the first time to explore the outdoor chimp habitat with Bunny, Lola (mother/daughter), Raven and Violet (also mother/daughter), and it went quite well! Bunny, with Lola on her back, did partially bring Maisie out clinging to her belly, which is the first time we observed this particular behavior. 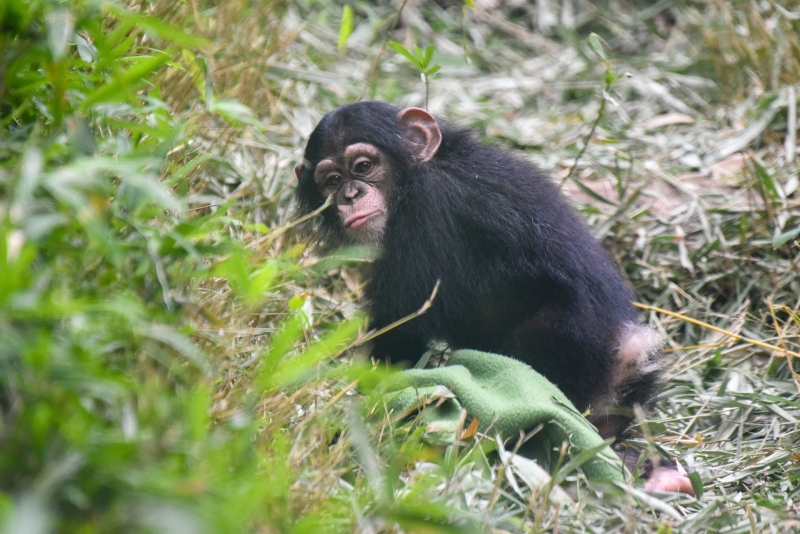 Maisie, as expected, was a bit nervous at first, but ended up doing lots of exploring and was seen climbing on both the top and bottom platforms.  She was observed playing with Lola and Violet on a back corner hammock as well. 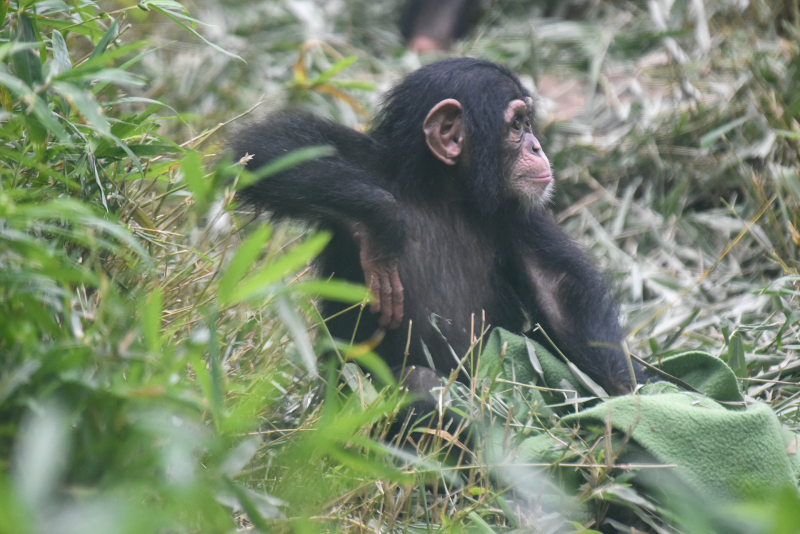 The Chimpanzee Forest animal care team also noticed that Lola was very vigilant. Maisie ventured into the thick bamboo and got a bit nervous, perhaps disoriented.  Both Lola and Violet quickly responded and helped Maisie find her way out. 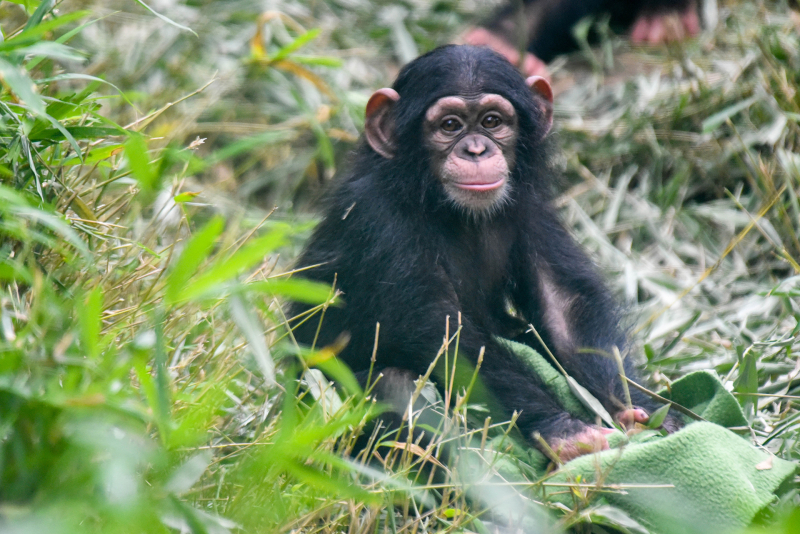 Maisie's mother would not care for her and she was brought to The Maryland Zoo in September of 2020 to be hand-reared before being integrated into the Maryland Zoo chimpanzee troop. Maisie will turn 1 on August 28, 2021.

Lola and Violet were both born at The Maryland Zoo. Lola recently turned 2 and Violet is 19-month-old.

In September of last year, Maryland Zoo welcomed this baby chimpanzee from the Oklahoma City Zoo after her mother failed to properly care for her.

ZooBorns last checked in with Maisie in early January. 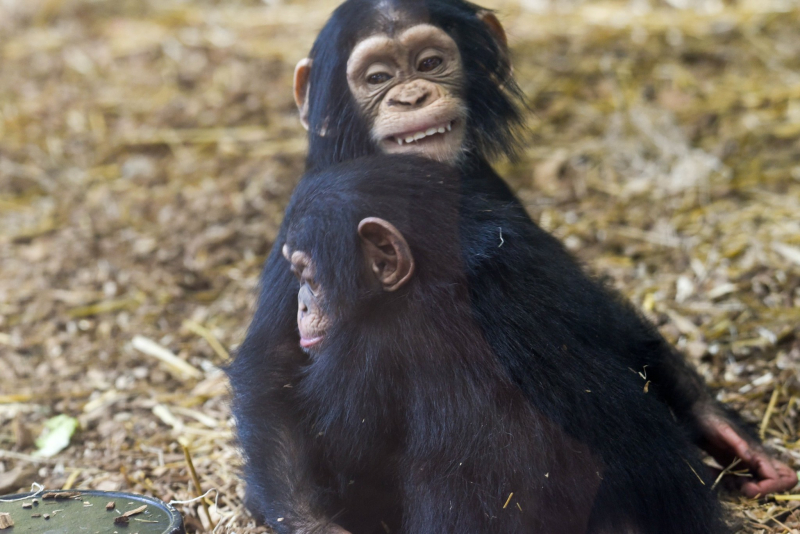 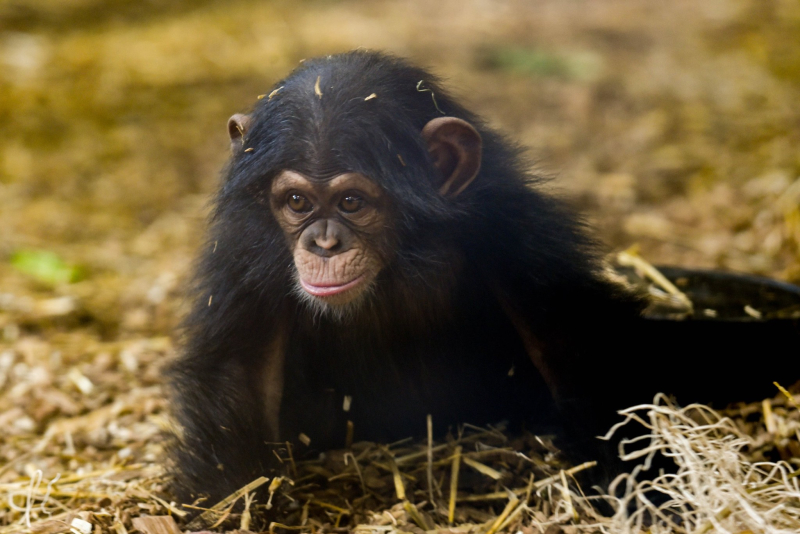 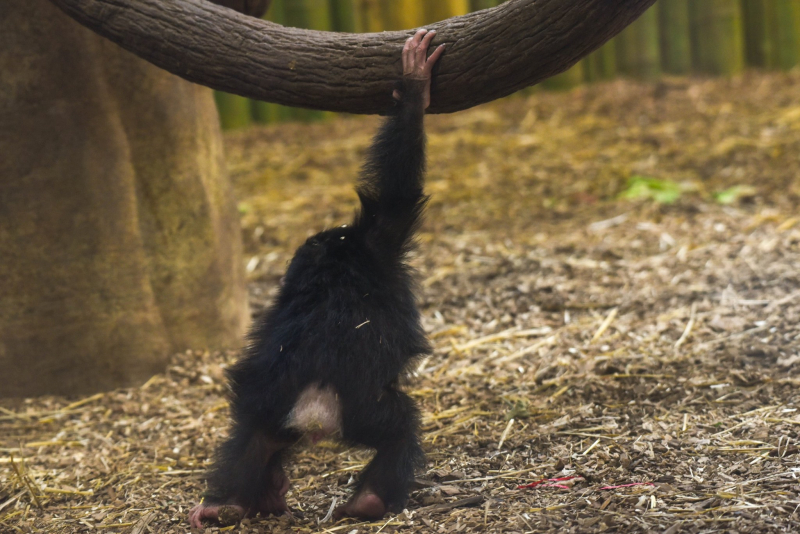 Zoo Staff were working tirelessly towards introducing the now six-month-old Chimpanzee to the rest of the troop.

Introductions haven’t always gone as planned, but dedicated keepers and staff have succeeded in introducing Maisie (little by little) to members of the group (including youngsters Lola and Violet).

The Maryland Zoo in Baltimore welcomed a female sitatunga calf to its growing herd on Thursday, February 4, 2021.

“We are very happy to welcome June, born to Cricket earlier this month. This little one did not appear to nurse as quickly as we hoped, but with some encouragement she did finally get the hang of it.  So, we are very pleased that she is thriving under the care of her mother, who was born here in 2013,” stated Erin Grimm, mammal collection and conservation manager at the Zoo. “This is Cricket’s second offspring and as a proven mother she is showing great maternal instincts.” 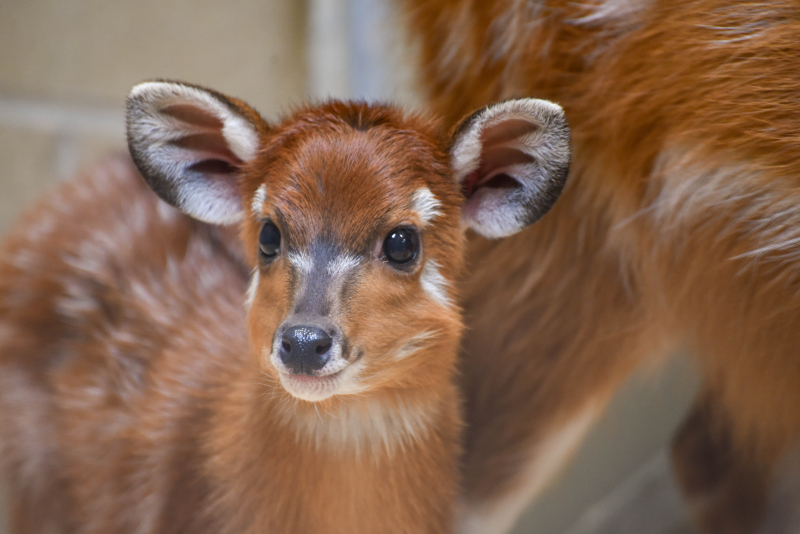 The sitatunga (Tragelaphus spekii) is a species of antelope native to Central Africa. They live in swamps, marshes and flood plains. Outside of protected areas, sitatunga are vulnerable to over-hunting and habitat loss, as people drain and develop swamp land. Currently, sitatunga are not classified as threatened or endangered.

The Maryland Zoo’s sitatunga herd is made up of 10 animals, including the new calf, and can be found in two habitats along the boardwalk in the African Journey section of the Zoo.

“For now Cricket and June will stay behind-the-scenes together," said Grimm. “As the weather warms up we will make a determination about when they can make their public debut outside in the Sitatunga Yard with the rest of the herd.”

The calf’s birth was the result of a recommendation from the Sitatunga Species Survival Plan (SSP) coordinated by the Association of Zoos and Aquariums (AZA). SSPs provide breeding recommendations to maximize genetic diversity, with the goal of ensuring health of the individual animal, as well as the long-term survival of the species population to help save animals from extinction.

While we love sharing the fun and amazing milestones baby chimp Maisie has been achieving, it's important to remember that Maisie is being cared for by trained professionals at The Maryland Zoo in Baltimore  and chimpanzees are wild animals that do not make good pets.

In September, Maryland Zoo in Baltimore welcomed baby chimpanzee Maisie from the Oklahoma City Zoo after her mother failed to properly care for her. Although they did not hesitate to bring her to The Maryland Zoo, this incredible opportunity is not without its own set of challenges. Caring for an infant chimp comes with significant expenses, including the costs of diapers, formula, and enrichment. Adding to that, Maisie requires 24-hour care, resulting in additional staff expenses.

To help offset some of these costs, Maryland Zoo’s Giving Tuesday (Giving ZooDay!) fundraiser is a baby shower for Maisie for those that would like to help "share the care."  The fundraising goal is $50,000. Just today they have unlocked a $10,000 matching gift from a very generous anonymous Zoo supporter and are now over halfway to their goal!

The web address for donations is Marylandzoo.org/babyshower

BALTIMORE, MD – Thanks to thousands of avid chimpanzee fans, The Maryland Zoo’s newest addition to the chimpanzee troop has been officially named “Maisie” (May-zee). 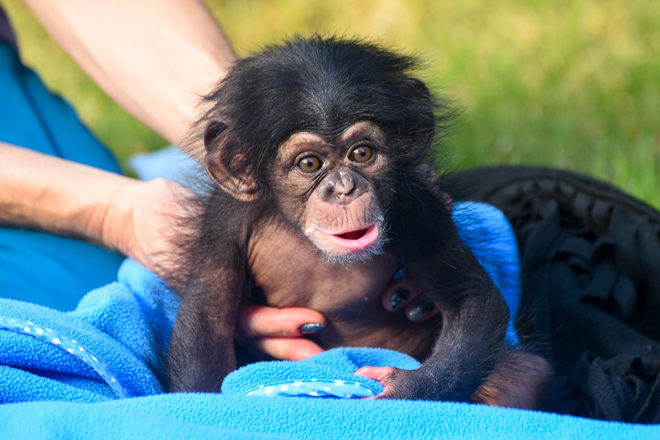 By the time voting closed at midnight on Thursday, Maisie was the winner in a tight race, with over 9,500 votes cast!  Runners-up were Asha, Olivia, Nyota and Tulia. The names in the contest were selected by the Chimpanzee Forest animal care team members, who are caring for the littlest chimp around the clock.

“We’re so happy she officially has a name,” said Pam Carter, Chimpanzee Forest area manager. “Animal care staff use individual names, especially during training sessions. The chimpanzees all recognize their own names as well as each other’s and being able to call her Maisie will help us make the important introductions to the troop when she is ready.”

Chimpanzees (Pan troglodytes) are classified as endangered on the International Union for the Conservation of Nature's (IUCN) Red List. One of the greatest threats to the wild chimpanzees is loss of habitat, the African forest, from commercial logging, agriculture and fires. Poaching and disease also put the wild population at risk.

“Another reason we give recognizable names to animals in our care is that it helps create a unique bond between the animal and our visitors,” said Margaret Rose-Innes, assistant general curator. “We hope that if they learn to care for the individual, they will also care about what we are doing to save that species, which is so important not just for our future generations, but also for the future of Maisie’s wild cousins.”

Maisie arrived at the Zoo in late September and is being cared for by the Chimp Forest Animal Care team who work in three shifts around the clock to provide her constant care. “Maisie drinks baby formula every three hours, sleeps, and has some playtime every day to help strengthen her muscles,” continued Carter. “We also wear a shirt and blanket that have fringe material sewn on that helps her learn to grip.” Maisie can now rollover by herself and she can also pull herself up into a sitting position.

BALTIMORE, MD -- The Maryland Zoo in Baltimore is welcoming a male lesser kudu calf, born on Monday, October 5, 2020 in the late afternoon.   The birth is the result of a recommendation from the Lesser Kudu Species Survival Plan (SSP), coordinated by the Association of Zoos and Aquariums (AZA). SSPs provide breeding recommendations to maximize genetic diversity, with the goal of ensuring the long-term survival of the AZA population and the health of individual animals.

The calf, which has been named Kadett, was born to seven-year-old Meringue and sired by ten-year-old Ritter. He is the second offspring for Meringue.  “The calf was standing and nursing within an hour of being born, which is very good. He has long, spindly legs and huge ears right now; he’s very cute at the moment,” said Erin Grimm, mammal collection and conservation manager. “Meringue is taking great care of him and we are pleased with his progress so far.”  Kadett stands about three-feet-tall and weighs in at about 14 pounds. “Right now he will remain in the barn bonding with Meringue for a couple of weeks. His first turn out into the habitat will be weather dependent, but we hope to have them outside before it gets too cold,” continued Grimm.

Lesser kudu (Tragelaphus imberbis australis) are one of eight species of African spiral-horned antelope. Male lesser kudu horns can grow to be 72 inches long, with 2 ½ twists. In the wild they live in dry, densely thicketed scrub and woodlands of northern east Africa. Interestingly, they rarely drink water, apparently getting enough liquid from the plants that they eat.  The Maryland Zoo’s kudu herd is made up of four animals and can be found in the African Watering Hole habitat along with addra gazelle and saddle-billed storks.