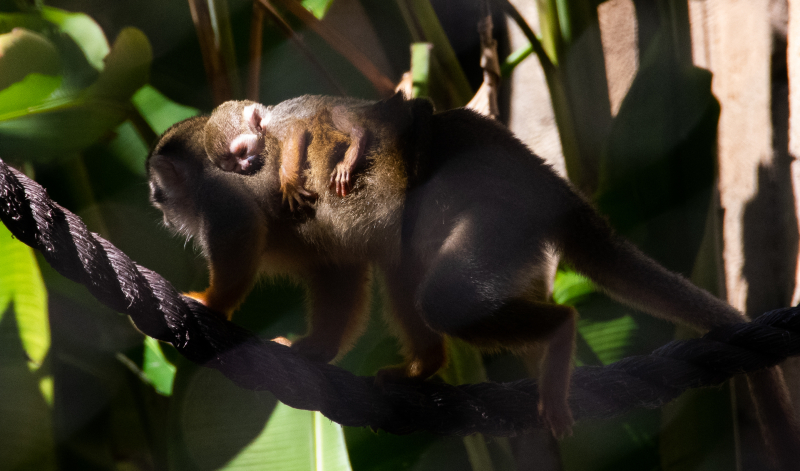 WEST PALM BEACH - October 26, 2020 - Palm Beach Zoo & Conservation Society family of animal residents has grown by one tiny new life. On October 8, Luna, a 12-year-old squirrel monkey, gave birth to a healthy baby in the wee hours of the morning. This is the first squirrel monkey birth at the Zoo since 2011 and the first for this troop.

“The animal care team has been diligently observing Luna and her baby over these crucial first days, and we are pleased to report that mother and baby are doing well. The troop has happily accepted the baby as one of its own,” said Mike Terrell, Palm Beach Zoo’s general curator.

“Every birth at the Zoo is unique. This one was a full team effort, from the primate staff, animal care team and a special assist at the end by the Zoo Ranger security detail.”

Since squirrel monkey births generally take place overnight, the nighttime security staff at the Zoo was asked to check in on Luna over several key nights. Brittany Taliaferro was on rounds the early hours of Thursday morning and spotted an extra small monkey in the habitat.

Squirrel monkeys are a small new world monkey weighing only about two pounds and onefoot long. A baby squirrel monkey is tiny, only weighing a few ounces. They cling to their mothers immediately after birth and look like a fuzzy backpack.

“Being a security guard at a Zoo comes with some unique responsibilities. It was my honor to enact our protocol and let the animal care team know we had a new birth overnight,” said Zoo Ranger Taliaferro. “The team told us which nights were most likely for Luna to go into labor, and what to look for.”

The dedicated and knowledgeable team at the Zoo has been working with the troop and hoping for offspring over the last few years.

“This is the best possible outcome,” said primate zoologist Devin Clarke. ”Luna came to Palm Beach Zoo in November 2018 and was introduced to the troop in December. We have been providing enrichment and safety to help encourage natural instincts since her introduction.”

Of the five species of squirrel monkeys two are currently listed as endangered, however all their wild habitats in South America are being threatened by deforestation. They also have a dicey history with humans, as many ended up in the pet trade from the 1940s-70s especially in Florida. They were offered as an ‘adorable pet and companion. Almost human...’ according to a vintage newspaper ad selling them for $18.95. What the ad failed to mention was their unhuman-like traits of marking their skin and tail with urine to leave messages for other monkeys on furniture and clothes. They also are social creatures preferring to live in large groups and languishing in homes as solitary pets. Thus, many pet monkeys were released into the wilds of Florida and developed five unique populations. In 2020, only two of these wild populations remain.

At Palm Beach Zoo, this troop is safe to exhibit all their natural behaviors and live as a cohesive unit, with one small addition. See the newest squirrel monkey in the habitat across from the jaguars in the Mayan Plaza every day. An endangered female Baird’s Tapir born on February 17 at the Palm Beach Zoo & Conservation Society is the Zoo’s first birth of 2014. The calf was named Luna in a naming contest at nearby Palmetto Elementary School. Jan Steele, General Curator for the Zoo, said from its birth, the calf has been in good health, and has been gaining weight at a steady rate. “At first, we monitored the calf, but gave Alyssa space to strengthen her bond with her baby,” explained Steele. “Because Alyssa rejected her first calf, we wanted to make sure she allowed this second one to nurse.”

Zoo keepers had been studying methods to increase the likelihood that Alyssa would accept this calf, and had given her “scratch-downs” which calmed her and allowed multiple ultrasounds that showed the calf’s progress before it was born.

The calf’s weight was 40.5 pounds on March 7, when she was seventeen days old. Zoo keepers said the calf is on target to double in weight within her first three to four weeks of life, as Tapirs are expected to do.

See more photos and videos, and learn more about Tapirs below the fold. Meet the newest addition to the Palm Beach Zoo's family! Delilah was born about 6 weeks ago and weights just over 6lbs. She was born to proud giant Anteater parents, Cruz & Odelia. The Palm Beach Zoo currently holds the second largest collection of Giant Anteaters in Association of Zoos & Aquariums (AZA)-accredited facilities. Delilah will not be available for public view for a few more months - stay tuned for updates on her progress. Odelia takes a break from baby... Palm Beach Zoo's newest arrivals are 5 Fennec Fox kits. The kits are approximately 7 weeks old, though their exact age isn't known, since they were safely tucked away in an underground burrow until earlier this month when they began to venture out to meet their adoring public.

Fennec Foxes are one of the smallest fox species. Large ears allow the Fennec to hear the movements of its enemies and prey over long distances, which is very important for a desert animal. It can even hear its prey moving underground. Fennec Foxes can be found throughout the deserts of North Africa and the Sinai and Arabian Peninsulas. Fennecs avoid the worst heat of the desert by living in burrows during the day and emerging only in the cool of the night. They dig their burrows at the base of small hills or in other places where moisture is likely to be retained for long periods of time. Despite the desert's lifeless appearance, there are in fact a large number of animal species available for the Fennec to feed on. Scorpions, spiders and beetles make up the majority of the Fennec's diet in the wild. The Palm Beach Zoo actively participates in the Association of Zoos and Aquariums (AZA) Species Survival Plan (SSP) for fennec foxes and has exhibited the species since 1995. Since then, the zoo has had nine successful births bringing the grand total of fennec foxes on zoo grounds to 13. Initiated in 1981 by the AZA, Species Survival Plans strive to manage chosen species and help maintain healthy, diverse populations that may become self‐sustaining in the future. SSPs also assist with field projects in home range areas, help educate the public, and provide funding for research and reintroduction of animals back into the wild, when appropriate.

Palm Beach Zoo Tiger Cubs Get a Taste of the Outdoors How they've grown! Here's a plethora of pictures of Malaysan Tiger cubs, now, and at three and a half weeks, playing in their outdoor exhibit for the first time at Palm Beach Zoo in Florida. They were born back on May 12; You can read their full story and see their newborn pictures on their first Zooborns post here. Berapi, the Palm Beach Zoo’s female Malayan tiger gave birth on Thursday, May 12th, to a trio of cubs. This marks the first tiger birth to ever happen at the zoo.

Berapi began showing signs of labor early in the evening and by 10:48 p.m. the first cub was born. Over the next several hours, two more cubs came into the world. The Mom is exhibiting excellent maternal behaviors while Zoo staff continue round-the-clock monitoring of her and the cubs using video cameras to minimize any intrusion during this very sensitive time. Based on video footage, all three cubs appear healthy. Neonatal exams will be performed in the near future and the sex of the cubs will be determined then. But for now, Palm Beach Zoo President Terry Maple says they are letting the mother take care of her babies. The birth of healthy cubs at the Palm Beach Zoo is a significant achievement, as the cubs will be important contributors to the genetic diversity of the overall population. These cubs are only the second litter of Malayan tigers to be born in captivity this year. Malayan tigers are among the smallest of the tiger species and named after the Malay Peninsula where they are found. In the 1950's there were an estimated 3,000 tigers there but today, fewer than 500 are estimated to be left in the wild.

The video below starts with night vision footage of the babies first moments of life.

Initially, decline in tiger numbers was primarily due to a great loss of habitat but more recently, the greater threat has been from poaching for its body parts, persecution by angry villagers, and starvation as their prey is over-harvested.

Otter pups Jessie and Wyatt were born at the Palm Beach Zoo in late December and made their public debut yesterday. Mother otter Louise taught the pups to swim in a tub behind the scenes within weeks of their birth. Just three weeks old, the Palm Beach Zoo's new baby Mexican Spider Monkey clings tightly to mom, Raven. This species is critically endangered in its native home of Central America due to habitat destruction. Interestingly, spider monkeys have lost their thumbs over thousands of years of evolution. The remaining four fingers form a near perfect hook for swinging from branch to branch. The Palm Beach Zoo introduced its newest arrival on Monday. With some coaxing, shaking branches, and a toy bouncy ball, Maya was soon out in public view for the first time. Read on for an adorable video of Maya's cautious debut.